LIFE Neil Armstrong 1930-2012: Thats one small step for a man, one giant leap for mankind.

Editors of Life,Jim Lovell Oct 18, 2021 Editors of Life,Jim Lovell
When the boy from Ohio was growing up he became obsessed with flight-he piloted a plane before he drove a car. He raptly followed the exploits of Chuck Yeager in the Bell X-1, and wondered if he himself might have the right stuff one day. As he saw the Mercury 7 astronauts assembled, he lamented that he had been born a generation too late for the great adventure into outer space. But Neil Armstrong's chance would come. His colleagues in the Gemini and Apollo programs wondered at his preternatural calm as he piloted through near-death experiences, and then, finally, in 1969, the Eagle landed, and Armstrong took "one small step for a man, one giant leap for mankind." He was instantly declared an American hero, but was he one? The good news, as thrillingly documented in the pages of this commemorative LIFE tribute, is that Armstrong was exemplary in many ways. From the boyhood years to the life-changing-and world-changing-accomplishment, Armstrong stayed true to his course, and did thereafter until his death in August 2012 at age 82. All of it is here: LIFE's coverage of the space race, the family photos from Ohio, the tick-tock coverage of Apollo 11, the retreat into the peace and quiet-and family life-that always mattered to Neil Armstrong. When he was younger, Armstrong gazed at the astronauts in the pages of LIFE. And now, his story is told there once more-in full. 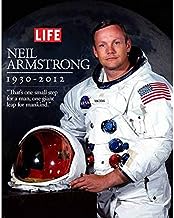